Genesis with Wheez-ie and Doctor Jeep 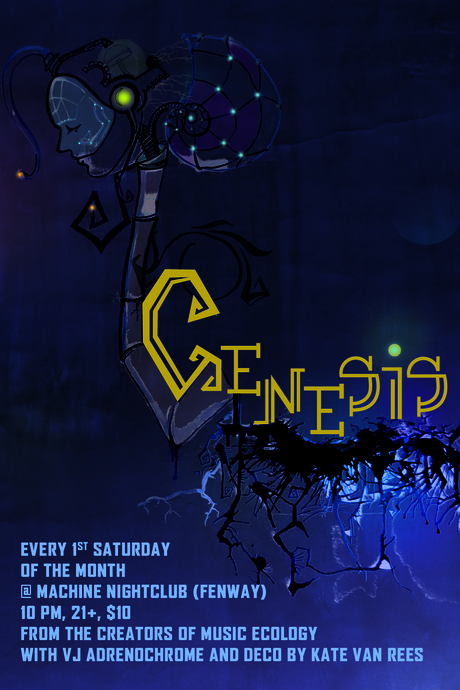 Wheez-ie
Wheez-ie is a 23 year-old producer/DJ from Houston who specializes in the dancefloor-shaking madness that is bass music. He has already released two EPs this year: the Juke-infused All Worked Up EP on Well Rounded Individuals, and the XLR8R-lauded Keep Yer Chin Up EP for Embassy Recordings, which has been called "pristine and full" "clean and smooth," and, at the same time, "spastic."

His releases have appeared on the aforementioned Well Rounded Individuals and Embassy Recordings as well as Salva's infamous Frite Nite label, while his remixes of Distal's "Coke Bottle" and Zoltan's "Pawnoramics" appeared on Grizzly and Freshmore, respectively. He's had support from DJs all around the world, including Machinedrum, Salva, Distal, DJ Rashad, Sines, J da Flex, Canblaster, Sam Tiba Ana Sia, Dubbel Dutch, Nasty Nasty, Dave Q, Donga, Damu Kanji Kinetic, Cedaa, Jackmaster, Cardopusher, Sinden and Mele. As he expands his career and continues releasing music, his entourage of admirers, friends and co-conspirators is only going to expand along with it.
http://soundcloud.com/wheez-ie
http://www.facebook.com/WheezieDubz

Doctor Jeep
Doctor Jeep is a 21-year old New York native known to most as Andre Lira. As a founder of Boston's Banana Peel crew, he's quickly gaining notoriety as one of the city's most diverse young selectors, blending upbeat house and techno with the global sounds of baile funk, dancehall, old-school uk garage, african percussionism and more. With eclectic DJ sets mixing the past, present, and future of dance music in some of Boston's best clubs, he has proven to adapt to any vibe and make it his own style of party.

Production-wise, Jeep's music has been described as "a style somewhere between the tropical inclinations of Dutty Artz and the grinding 808 electro of Swamp81." He's released two EP's this year on his own imprint and growing New York label End Fence. His tracks have been featured in XLR8R and been played by Kastle, Lando Kal, Pictureplane, Chaos in the CBD, LOL Boys, French Fries and many other international artists. With forthcoming releases scheduled on several European and American labels, the future looks bright for this new talent.
http://soundcloud.com/drjeep
http://www.facebook.com/doctorjeep


check out live recordings from our Tuesday nights at http://www.soundcloud.com/music-ecology