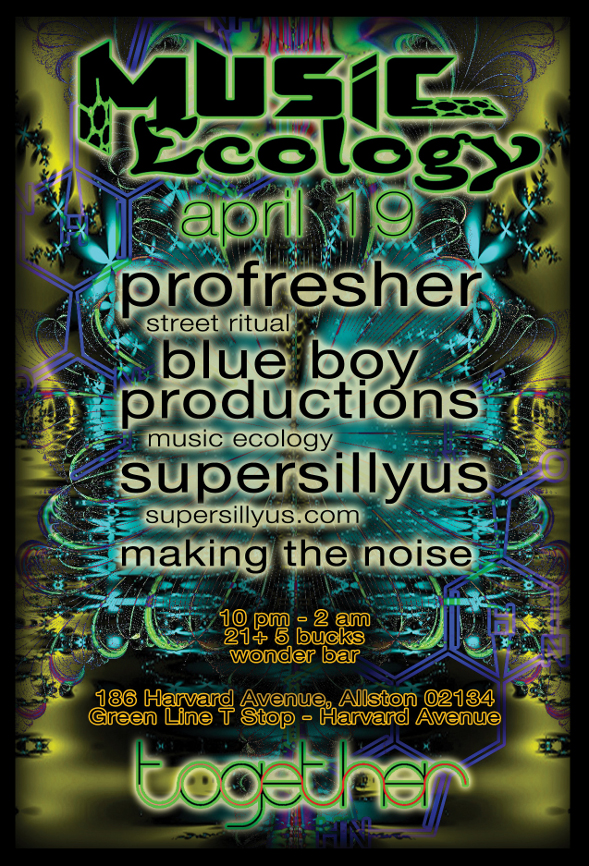 We thank the masterminds behind Together for all of their hard work in making this festival a reality.


Profresher
Profresher AKA Billy Blacklight according to some is responsible for a "Crunk-flavored beats and 'neo-g-funk' basslines set a bold stage for the crisp synth lines that cruise on top. Listening to the album from beginning to end is like playing the PS1 Gran Turismo in a subwoofer-laden submarine while sippin' on some 'tussin. There's a late-90s throwback vibe throughout, as well as enough bass to make even the skinniest booty clap 'til dawn."
http://soundcloud.com/profresher
http://billyblacklight.bandcamp.com/


Supersillyus
Supersillyus is an electronic musician and producer based in Allston, MA. His music is a genre-bending adventure through psychedelic dub. He has opened for acts such as Hallucinogen, Conspirator, Archnemesis, EOTO, DJ Logic, and Alex B (of Pnuma Trio). His first full length release, Grampaspaceshuttle, tickled the ears of the electronic community, earning him a spot on LostinSound.org's Top 5 Newcomer Albums of 2010.

He has spent... the past year and three months meticulously crafting his second record, “Tesselations,” which will be released this March on Base Trip Records. The result is an epic double album that will allow listeners to explore highly evolved and extensively layered soundscapes while shaking it to a tasty mix of tribal drums, swirling synths, and the occasional marimba solo.
http://supersillyus.com/
http://www.facebook.com/Supersillyus


Making the Noise
Making the noise is an alias of Adam Ribaudo, a Boston-based producer who delivers cerebral electronic music that varies from lush airy sonicscapes to dirty glitchy beats. Using an assortment of custom or self-made software and hardware components to keep his music organic and spontaneous, mtn makes laptop music that doesn't hide behind the laptop.

For 10 years, Adam has crafted an original sound that stands out as fresh voice in the growing body of electronic artists. Not being tied to any single genre or BPM has allowed his musical identiy to morph over time yet consistently producing output that stands on a threshold of accessibility and experimentation.

Helping shape his output is the ultra minimal but fully functional monome controller with which consists of a grid of LED lights running software of his own creation. Recently he's begun generating visuals to marry to his sound using tools like Processing and the Xbox Kinect.

His live set ever-changing as he seeks to feed the crowd's rections reaction back into the enthusiasm and energy he brings to a performance. Mtn has learned from DJ's how to blend sounds and get the audience to move, but prefers to do so with entirely original material that can't be duplicated by anyone else and keeps the moment unique in time.
http://www.makingthenoise.com/


Visuals by our resident VJ Shmeejay