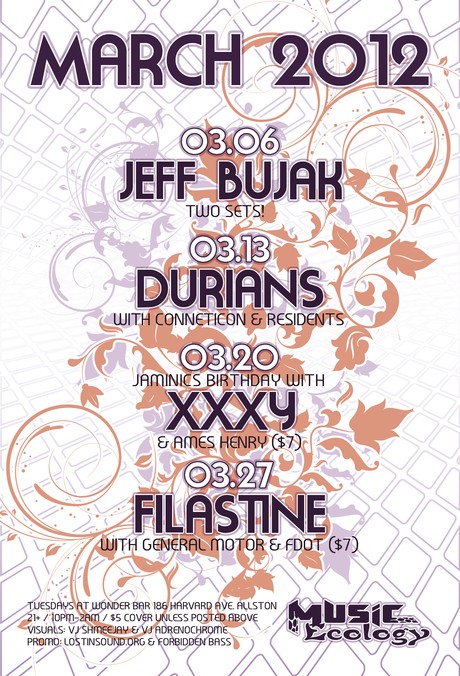 XXXY
Having spent his youth in various bands xxxy finally decided to hang up his guitar and mic and began producing electronic music fuelled by his love at the time of drum and bass and techno. Through the influential record shop Pelikan Neck he picked up on the early forms of dubstep and began focusing his productions on bass heavy garage influenced tracks. This led to his first release as "forensix (mcr)" on Revolution music in 2006 with one of his first productions.

After the release of his first record, he took a break to tighten up his production. He came back in 2009 as xxxy which led to the releases of "Reflections ep" on the influential Manchester label Mindset and "Science Fiction/651" on Formant Recordings. By late 2009 he had begun to become more and more influenced by house music which had begun to take up a much larger section of his record collection.

2010 saw the release of a split of the very well received 12" on Infrasonics. Comprised of the Baltimore influenced "Blue Flashing Lights" and the Funky Roller "Know You" which was included in FACT magazine's tunes of 2010 list.

Later in 2010 he released the critically acclaimed garage influenced ep "Every Step Forward" on Fortified Audio.

The January 2011 release of "You Always Start it/Ordinary Things" on Ten Thousand Yen increased xxxy's burgeoning reputation with Pitchfork picking "ordinary things" as it's best new tune of the day "What's so special about "Ordinary Things" isn't its parts, though, but how impeccably they are put together...This rush comes complete with a joyous "Whoo!" sample to let you know that, yeah, while you're getting the chills, this is still body-moving music."

2011 will see releases on Orca, Well Rounded, Infrasonics & All City together with Remixes for Tri Angle and the Count & Sinden.

As a DJ xxxy has produced well received mixes for FACT, BBQ & URB as well as playing dates all over the UK and Europe.
http://triplexy.co.uk/
https://www.facebook.com/triplexy

Jaminic
"Over the past few years, Boston based DJ/Producer Jaminic has been playing under his main project N.E. Tempo. For this young producer, music is a lifestyle, and he is an inspiration to other young artists who have seen him take a dream and run with it. His interest in playing music started in his early teens when, inspired by the radio, he wanted to learn to mix tracks himself. He started his music career spinning records and soon became immersed in more technology like CDJs and midi controllers. Influenced by artists such as Orchard Lounge, Dirty Bird Records, James Zabiela, and Modeselektor, Jaminic's deep bass and melodic house beats create a feel-good Tropical atmosphere, where everyone wants to be. Currently a student, he has taken classes at the New England Institute of Art for Audio Production, such as Audio Technology--where he studied waveforms and frequencies, and Audio Recording, in which he recorded and edited a band in the studio. He is also largely self-taught though countless hours in the studio working on original production.
Jaminic started playing at local parties and clubs in Massachusetts including Goodlife, Middlesex, Phoenix Landing, Rise, and Umbria. He soon went on to play to bigger crowds at venues like Santos Party House in New York City, Lupo's and Therapy in Road Island, Curve Ultra Lounge in Maine, and Castaway's in New York State. Jaminic has played with some of the hottest artists including Nasty Nasty, Big Gigantic, Benga, Steve Porter, Zeds Dead, Orchard Lounge, Clockwork, Nightriders, Alex B, Two Fresh, Beats Antique BioDiesel, EOTO, Nit Grit, Sub Swara, Walter Jones and last but certainly not least Chas Bronz. He has affiliations with groups such as The Brain Trust, Mass EDMC, True Crew, and CreateSpace Collab (CSC). Ranging threw all genres of electronica Jaminic's main style of sound is tropical bass, as it has many natural elements of global island vocals and crunchy bass lines. Presently, he has a monthly residency at An Tains in Boston called Bass Oasis, which features many local up-and-coming and headlining artists. He is also involved in the production of a music festival located in central Massachusetts called Camp Coldbrook, held in late June, which features live bands, DJs, a silent disco, and performance groups. "
"http://soundcloud.com/jaminic
https://www.facebook.com/jaminicbeats

Ames Henry is a producer and Dj based out of Seattle, Washington.  He started producing in the summer of 2010, influenced by the West Coast Low End Theory scene and by electronic pioneers such as Richie Hawtin. Ames Henry can never be boxed in by one style or sound as he is always trying to explore the emotional nuances carried by each genre. His latest collection of beats can be described as driven, eccentric, and cinematic. Ames Henry hopes to explore outside the West Coast beat driven scene, taking cues from Detroit techno and give Seattle its own character of electronic music as LA, Detroit, Chicago, and New York have done. Ames Henry states, "Today is one of the most exciting times to be alive, hopefully our generation will not be overshadowed by the baby boomers as we will have a rugged, honest sound to track our experience through tomorrow's hectic world."

Music Ecology is a Boston based event production collective formed in the summer of 2009. Our weekly Tuesday night residency at Wonder Bar a well as numerous events throughout the city have exposed Boston audiences to numerous local, national and international talent. Our upcoming events include
Filastine (3/27 - Wonder Bar)
Bird of Prey (4/3 - Wonder Bar) - as part of Together Boston (http://www.togetherboston.com/)
Photek w/ MC Armanni Reign (4/7 - Machine) - as part of Together Boston (http://www.togetherboston.com/)