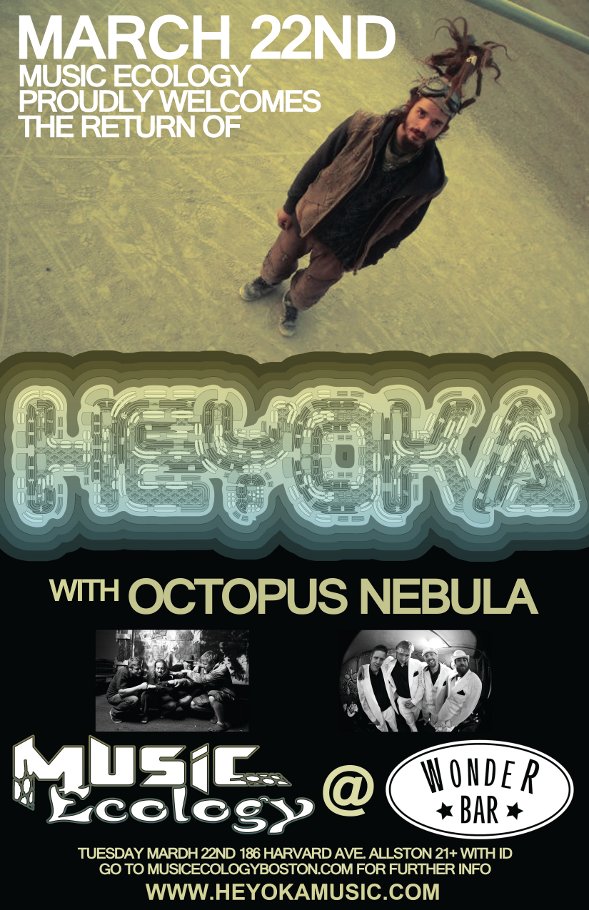 Heyoka AKA Andrei Olenev is a cosmic auditory scientist found in the Bay Area noosphere, who has been blowing minds with his sonic manipulations.
...Muti Music first released Heyoka’s “Space Case EP” in 2008 and included him on their growing roster of talented artists. His albums ‘Whomp Gland & Pineal Dub’, ‘Gate Code’ and the all new ‘Marklar’ album in 2010 have shown that he is a producer consistently evolving his musical style while managing to maintain a signature sound that is distinctively ‘Heyoka’.

His early influences in Downtempo, Dub and IDM combined with midtempo dancefloor genres have helped create a very unique sound that combines relentless basslines, hip hop rhythms, dub vibes, and musicality and melody, all within an atmosphere of heavy psychedelia and alien dimensions. The response to his emergence so far has been overwhelming with Heyoka developing audiences and playing festivals from US to Canada and Australia.

Colorado’s Octopus Nebula has recently opened up on the scene, impressing audiences far and wide with their new style of music that blends elements of electronic, ambient, downtemps, breakbeat, rock, acid jazz, and ethereal grooves.
Originally formed in 2004, the current incarnation coalesced in 2008 and consists of Fleeb Thomas on bass, Robin Bloch on guitar, John Safarik on keys, and Dan Raasch on drums. These musicians have come together not only to inspire the dance floor (which they do on a regular basis), but also to spread positive vibrations through music.
The rise of Octopus Nebula has been swift and complete, as was evidenced at the first show they ever played together, a sold-out gig at Colorado’s famous Mishawaka Amphitheater with musical icons from across the pond, Shpongle and Ott. In addition to these two major names, Octopus Nebula has shared the stage with such heavy-hitters as the Disco Biscuits, Random Rab, Bluetech, Lotus, David Murphy (of STS9), Ana Sia, Eskmo, Boombox, Signal Path, EOTO, and RJD2.
Currently laying out the textured psychedelic grooves for their first album, Octopus Nebula shuns the formulaic in favor of a purely original sound, a gamble that has paid off in the long run for this talented quartet. The music refuses to be classified and, as a result, gives the sense that the members of Octopus Nebula are truly breaking new ground.

This particular Music Ecology event will be $10 at the door. Send an email to musicecology@gmail.com to find out how to be on our reduced list.