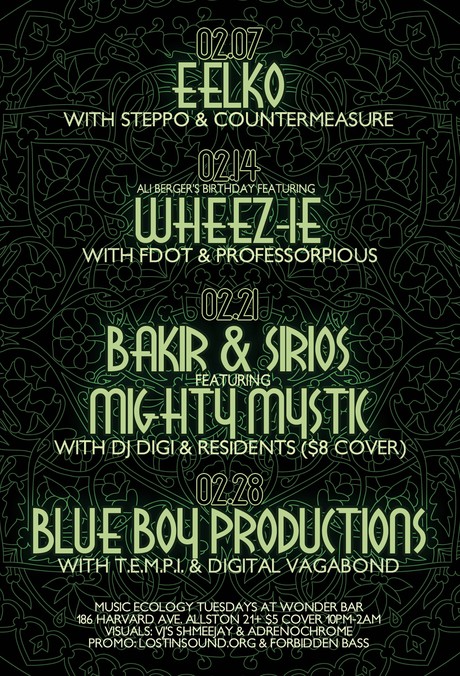 Eelko, born Christopher Carchedi, is a live performing artist hailing from Boston, who with his music blurs the lines between hip hop, funk, trance, dubstep, and a plethora of many other influences. Drawing inspiration from a love of avante garde jazz and free form 'jam' music, Eelko's live performances are always kept fresh and interesting.
http://soundcloud.com/eelko
http://eelkomusic.com/
https://www.facebook.com/eelkomusic

With over ten years experience in the game, and a serious love for all things music, DJ Steppo has rocekd crowds from Vermont to Miami and San Francisco, and has played along such acts as Pendulum, Adam F, Mayhem, Juju, Reid Speed and many more. He recently started his own label, Lovewave Music - focusing on the futuristic sounds of dubstep, house, and techno. you can catch his radio show on dubstep.fm every 2nd and 4th wednesday of the month.
http://soundcloud.com/steppo
http://lovewavemusic.com/

A 16 year veteran of the New England rave scene, with over 12 years behind the decks. Not so much of a dj, as just simply a music enthusiast, his only real aspiration for djing has always been to make something he enjoyed listening to and then share it with others. Playing along such acts as Digital, Terravita, Paul C, We Bang, I-Che, Hellfire Machina and the who's who of the New England rave scene and more recently winning a demo contest for his mix 'Last Junglist Standing' and the opportunity to open for such massive dnb names like Dara, D-Star and Hive. For the better part of the last decade, he was focused mainly on Jungle/Drum n Bass but in recent years began to branch out spinning House, Tech House, Speed Garage, Breaks, Dubstep and Hip-Hop making him a well rounded and versatile DJ. Renergized about playing music and bringing people some banging beats and bass, expect new mixes regularly , not restricted to any one style or genre just whatever feels right at the time.
http://soundcloud.com/countermeasure-1

Visuals by VJs Shmeejay and Adrenochrome


For this and future events please visit http://www.musicecologyboston.com/
or find us on Facebook at http://www.facebook.com/MusicEcology