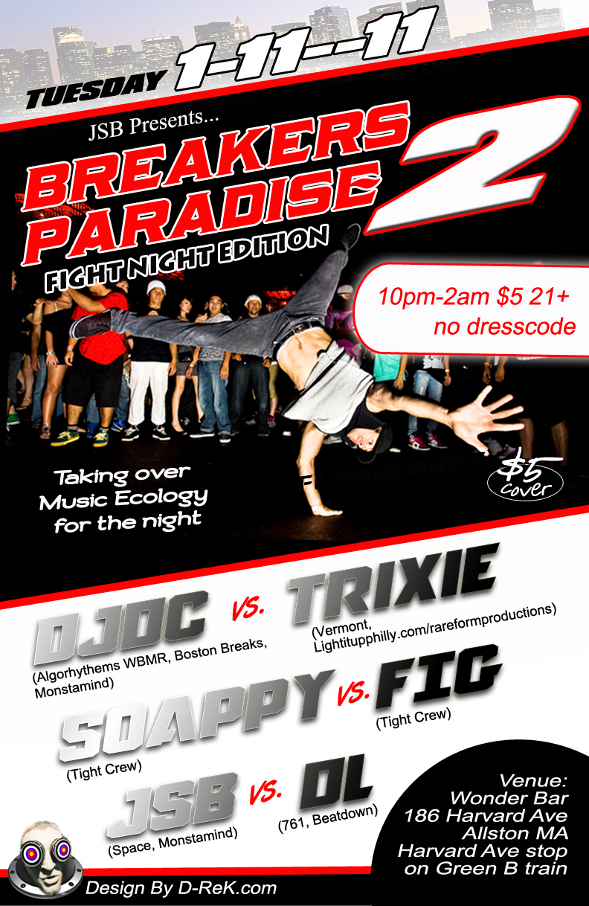 It's time to do it again, and this time its personal! Tonight it is my pleasure to present to you Breaker's Paradise II : Fight Night Edition. For the first time at Music Ecology I have for you an all tag team breakbeat / real electro (not electro house) night being performed on 4 decks and 2 mixers!

DC: DC has been involved with the electronic dance music scene in Boston and the northeast since the early nineties. He got his start with legendary Monstamind Crew, know for a series of breakbeat events in Boston through the nineties. Currently DC appears every Saturday night from 2-4 am along with DJ Endo on Algorhythms 88.1fm WMBR. Bringing a much needed dose of electronic music to the airwaves around Boston Mass.

Trixie : Originally a boston native, Trixie started playing out in 1993, going international in 1995. Trixie has held around fifteen residencies throughout new england and new york, and played around a total of six hundred shows. as for other performers, you name em, she's played alongside them.

Next up we got the rave saving up and coming duo of:

In the summer of 2008 a collaborative project was launched that would combine the choice skill sets of two dynamic New England area breaks djs, namely FiG and Soappy, to be known thereafter as Big n’ Dope! This combination of experience and enthusiasm is firmly founded in the duo’s strong technical proficiency, impeccable selection of quality tracks and their innate ability to deliver high energy and performance to seething dance floors.

FiG and Soappy have a combined sphere of influence that reaches from Maine down to Pennsylvania having made appearances at all points there and in between. They have respectively and collaboratively been called upon to open for such leading industry names as Adam Freeland, the Freestylers and Uberzone versus Bassbin Twins.

In May of 2009 Big n’ Dope released their much anticipated self-titled debut demo mix. The mix immediately garnered much praise from all corners of the north east scene and has since become a favorite amongst partygoers and industry professionals alike. Now firmly established as a force within the north east scene this forward thinking duo is cultivating an expanding sound and evolving far beyond the borders of their breaks base to include dubstep, drum and bass, house and various elements of psy. Look for many upcoming Big n’ Dope appearances in the near future showcasing this sonic evolution as well as the follow up demo mix now in the works. Hold Tight!

Rounding out the night will be the scratching and cross fadery of :

JSB : The man behind breaker's paradise. JSB's sets have been described as "room-shaking, hard-hitting, booty-bouncing, head-nodding cocktail of awesomeness!" JSB has been spinning since 2000 but has finally hit the scene hard. Starting in 2008 in the underground he continues to hold down one of the best lofts boston has ever scene. Throwing one successful party after the next JSB is ready to bring his style of music and parties above ground! Always known for taking "risks" live and working in a lot of remixes JSB's favorite part of electronic music is the "what's gonna happen next?" factor. Breaks is the perfect genre for him as he has embraced the challenge of combining big beat sounds from every genre of breaks into a cohesive sound that always shocks people and has them wondering what tracks were those, and did he do that mix live or was it all one track?

DL : On April 13, 2002 DL signed up for a dj battle at the (now legendary) Club Asylum in Springfield, MA. He won first place and feels that it was the event that got "his foot in the door." DL found himself getting booked more often and continued to promote himself by handing out mixes and networking with promoters. Shortly after his win at the Asylum, DL went on to place first in two more dj battles.

DL continues to be one of the fastest rising breaks djs out of New England and continues to light floors afire with a show like no other by combining all styles of breaks and turntablism, doing live remixes, and bringing something to the table like no other. With DL's nasty scratching and flawless mixing and diverse styles, a serious force to be reckoned with having played all over New England, NYC and as far as Florida, and the West Coast. Make sure to stay late and catch this special tag team set, and also for a chill after hours to be announced the night of the show.