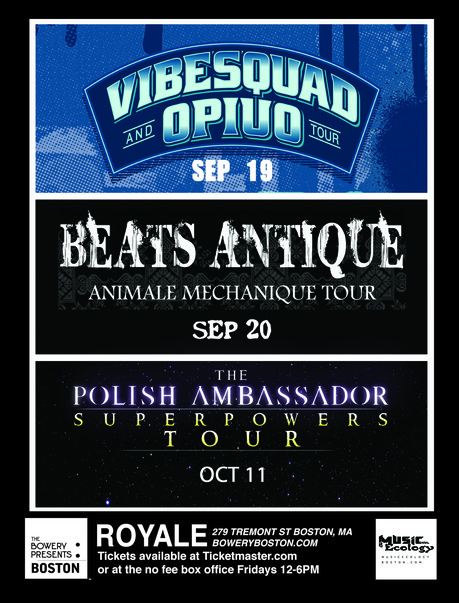 VibeSquaD is the multi-personality brainchild of Aaron Holstein. With releases on NativeState, Proboscis, Interchill, Muti, and Sonic Dragon (Hong Kong) in 2007 alone VibeSquad is quickly emerging as a top producer in the west coast US electronic music scene. Both 2007 EPs "Return of The Pudding People" & "Songs to Accompany Dance Move: The Worm" have been making there way around the globe showing up in DJ's sets and causing serious mayhem on dancefloors. Though his legendary live sets may cause whiplash and heart attacks in the unsuspecting bystander, those prepared to launch get much more than they bargained for. Aaron's music defies typical genre-labels and covers tempos from slow 'n hard lowriding krunkadelics to mid-tempo barnstormers all in a seamlessly flowing soulful mash- dirty and beautiful as life itself. Aaron also plays bass/keys for the bands ZILLA (w/ Michael Travis & Jamie Janover) & SPORQUE (w/Ooah & Jamie Janover).


OPIUO
Ever wanted some extra funk in your life? What about some warm syrupy bass sauce to compliment your daily adventure? Well now you can have all that and more within the perfectly crafted sonic soundscape that is Opiuo. A Kiwi who now calls Australia home, Opiuo is a chief sufferer of intense musical addiction, spending every spare second creating audible treats and selling out venues throughout the
entire world.

He's performed alongside the likes of MC Hammer and Bassnectar, reached #1 chart positions on Beatport, Addictech, and iTunes. His latest full length release, "Slurp And Giggle" was nominated for Best Dance / Electronic Release at the Australian Independent Music Awards and was the most downloaded album for 2010 on addictech.com. In turn, inspiring and captivating people all over with his highly original and uncontrollably addictive take on fun fueled electronic music.

His remix credits span world renown artistic icons like Infected Mushroom and Kaya Project. Music from the Opiuo Lab can be found on television, in documentaries, on radio (BBC Radio One + JJJ) and specifically selected for compilations by artists such as legendary broken beat pioneer BT (Black Hole Recordings).

Live, Opiuo is an ever evolving feast for the ears. From a one man show equipped with drum machines and synths, all the way to The Opiuo Band, amassing a collection of the worlds best musician's to perform his music 100% live. The last Live National Australian tour showcased his ability to translate these electronic manipulations into a live form, showing the true musicality of Opiuo and his creative endeavors.


HeRobust
Hayden Kramer, known as HeRobust, is an Atlanta based producer that has been blending genres ever since he emerged onto the electronic music scene in early 2011. HeRobust's debut EP, Albumin, was released on Saturate Records in February of 2011 and was quickly recognized by industry leaders such as XLR8R, Vice, and Jay Scarlet of Beat Dimensions. Soon after, heRobust found himself shared the stage with the likes of Flying Lotus, Daddy Kev, Gaslamp Killer, Salva, NiTGrit, Shlohmo, Shigeto and many more. February of 2012 marked Hayden's second release, the Late Night / Morning After double album. The release was met with rave reviews all over the internet, select tracks even finding there way to the featured page on vimeo, top 50 on hypeM, and a feature on Diplo label Mad Decent's blog.