The Spit Brothers with Spliffolian and Mistah Lex 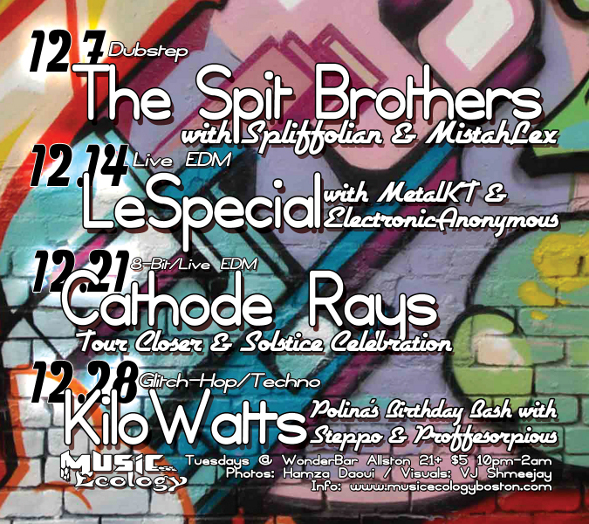 We know how much you love seeing Bakir come back to our neck of the woods and this time he is bringing some serious West coast talent with him as he introduces Boston to The Spit Brothers for the first time, featuring drummer Brent Sirois. Check out http://soundcloud.com/dubsalive and check out some free Spit Brothers tracks!

~ The Spit Brothers (est. 2005) are a live bass music band based in San Francisco, playing dubstep, dub, ...afrobeat, and funk.

~ They have releases on Full Melt Records, Record Label Records, and Dubs Alive Records with their first 12" coming out on TUBA records soon!

~ They have performed alongside Caspa & Rusko, RSD, Joker, Jazzsteppa, Plastician, Kromestar, Joe Nice, Matty G, DJG, Djunya, Antiserum, and many, many others.

Spliffolian (SUBduction)
Spliffolian AKA Selecta Folian has been spinning records for the past nine years, beginning his DJ career spinning reggae, roots, and dub at his college’s radio station in Portland, OR, KRRC. In 2007 he moved to San Francisco, cutting his teeth in the dubstep scene playing some of the original dubstep nights there like BRAPDEM! Upon moving to Utrecht, the Netherlands in 2008, he quickly became immersed in the thriving dubstep scene holding down a monthly residency in Utrecht from his first month there and playing numerous other gigs in Utrecht and Amsterdam. Since moving back to his hometown of Boston he’s played at most of the main underground music events including Bassic, Music Ecology, DubWise, and a number of nights with his DJ crew SUBduction at Enormous Room while also holding down a weekly Sub.FM radio show, SUBduction Radio, every Monday, 9-11pm EST. Spliffolian is known for his tight mixing, diverse selection, and deep knowledge of dub and dubstep, expect some heavy dubplate selection and serious bassweight!!!