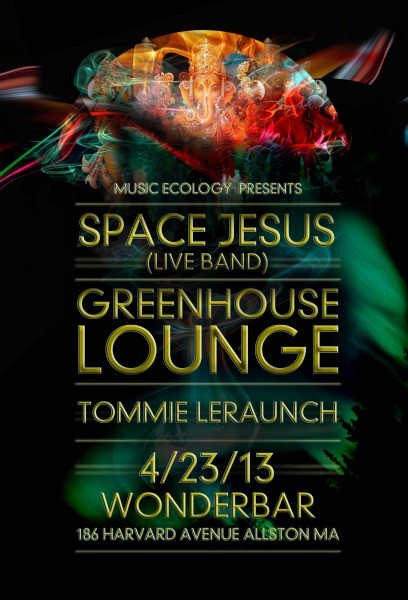 Space Jesus will be performing with a live band!

Philly based EDM producer Jasha Tull has created an ever expanding and mind melting experience as Space Jesus. Exploring a multitude of EDM stylings and effectively branding each track with his own bass fueled, psychedelic, Hip-Hop flavor, Space Jesus delivers music that is undeniably fresh and consistently captivating. Jasha began producing music at age 16 with an initial focus on Hip-Hop, that eventually led to his fascination with the production of future-bass music. In 2011, Jasha released SPACE JESUS EP, which immediately brought him an incredible amount of followers throughout the East Coast. But it wasn't until the release of 'PLANiTS' on Mal Label Music, that his popularity spread from one coast to the other. The 'PLANiTS' release charted into the top 5 on multiple Beatport lists, and landed as an exclusive track on the website for weeks.

Quickly gaining recognition for his individuality, creativity, and high-energy live show, Space Jesus has been popping up all over the states, sharing the stage with acts such as Big Gigantic, Zeds Dead, Conspirator, Two Fresh, Break Science, Adventure Club, Freddy Todd, Kraddy (of the Glitch Mob), Minnesota, The Polish Ambassador, Sugarpill, Mr. Bill and Bluetech. Space Jesus has instantly become a mainstay of the electronic music festival scene, with appearances at Lights All Night, Camp Bisco, Big Up, Rootwire, Uphoria Festival, The Magnetic Gathering and even the Dubstep Music Awards. Hustlin' hard into the new year, Space Jesus shows no signs of slowing down. Keep your eyes peeled, or keep 'em shut, either way you're bound to see Space Jesus tear a wormhole right through the ever evolving EDM scene.

Greenhouse Lounge is an electronic musical trio that combines the computer based production of a DJ, accompanied by rock guitar leads, heavy synthesized bass and live drums. They are adept at merging these rumbling dub basslines with pumping electronica beats, breakbeat dynamics and staggering sample manipulation. Their music can be described as euphoric; a hypnotic based sound; tightly woven sonic soundscapes that are rich in melody and texture.

For this and future events please visit http://www.musicecologyboston.com/

check out live recordings from our Tuesday nights at http://www.soundcloud.com/music-ecology