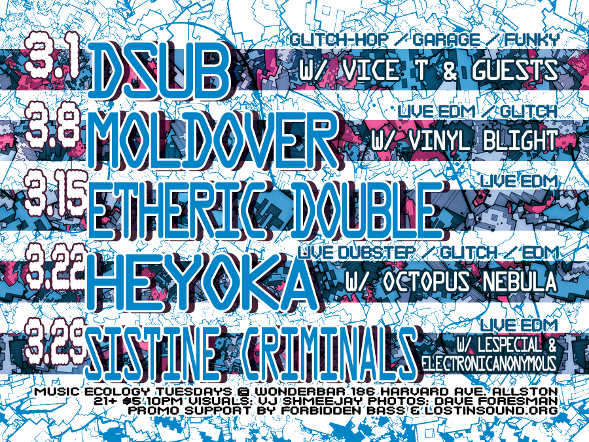 Sistine Criminals (http://sistinecriminals.com/)
Originally founded in Boston in 2005 by saxophonist Aaron Burnett and drummer Greg "TORCH" Sgrulloni, Sistine Criminals is a live experience like no other whether fully acoustic or plugged in. The music is a fusion of modern electronic dance genres such as drum n bass, house, dubstep, IDM, and hip-hop with the... creative/intellectual influences of jazz, classical, and world music. The Sistine Criminals strive to successfully emulate the vibe of a live DJ while simultaneously producing the intensity and chemistry that can only exist between a live group of musicians.

Sistine Criminals is based in Brooklyn and is currently active in the underground party and live music scene in New York City.

"Only in the presence of JoJo Mayer have i seen a purely acoustic band create such hot music in this genre." - J. Trimarco - fan!


Lespecial (http://www.myspace.com/lespecial)
Lespecial is renknowned for bringing it down *hard* at fab parties attended by people who love to get drunk and rub their fun parts together on the dancefloor in a state of crazed hedonistic mania.

ELECTRONICAnonymous (http://soundcloud.com/electronicanonymous)
ELECTRONICAnonymous is the EDM brain-child of Jules Jenssen. 1/3 of underground dance-fusion power trio HiGHER ORGANiX, Jules has been playing music since he was 6 years old, first dabbling in piano, then embracing the drums as his musical voice. Heavily rooted in traditional band style rock/ funk music, (Floyd, Hendrix, Zeppelin, Phish, all his father's bands, etc..) Jules found electronic music as a pre-teen and immediately was drawn to carefully sculpted, evolving beats, throbbing bass, and euphoric synthetic sound design. Although he didn't start making electronic music for years, he continued to integrate the theory into his drumming and live band. In the summer of 2008, Jules dove head first into the world of EDM production and nocturnal sleep cycles, making everything from electro-house, to dubstep, to krunk - -& styles yet-unnamed. Having already headlined shows including Music Ecology @ Wonderbar Boston, played festivals such as Camp Bisco, Desiderata, and the Big Up as well as having shared the stage with OTT, Lotus, Sub Swara, Bluetech, King Britt, Dub War NYC and Psylab, to name a few, the anonymous might not be unknown for long...