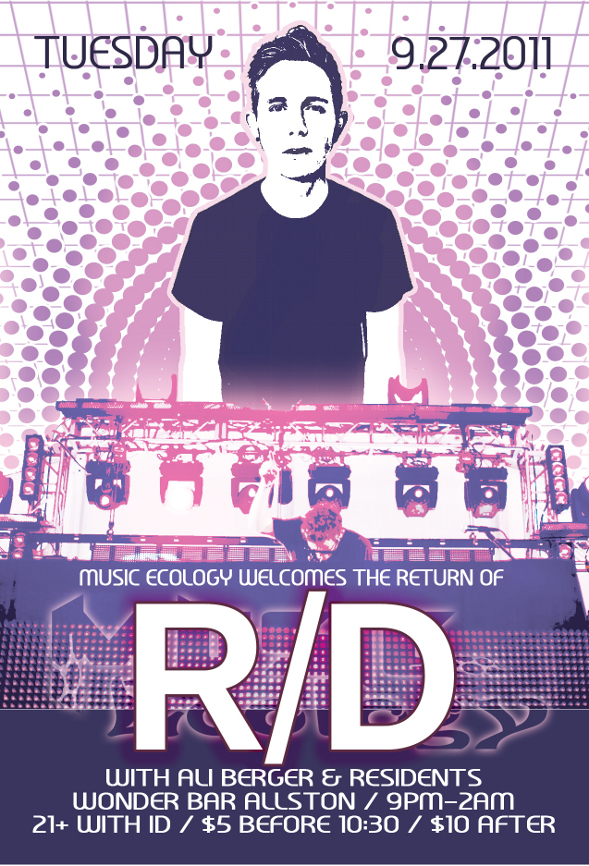 R/D is is the musical creation of R.D. White, an LA-based electronic music producer and performer. Known for mixing crushing breaks with swirling indie rock melodies, R/D is part of a new generation of producers melding electro-hop and indie rock.

In addition to producing, R/D performs dynamic live sets as a musician, playing keyboards and controllers in real time to create the epic melodies, sweeping builds, catchy hooks, and massive drops that define his sound.

R/D gained widespread notoriety with his 2010 remix of Fever Ray’s ‘I’m Not Done’ – which reached #2 on Hype Machine with an unprecedented 27,000 listens in just 3 days. The title track from his ‘Face Of God EP’ again landed him in the top 3 on Hype Machine’s Twitter charts. His official remix of The Glitch Mob’s ‘Starve the Ego, Feed the Soul’ is the #1 download from the entire 2 volume remix compilation series ‘Drink The Sea Remixes′.

Ali Berger is a producer, DJ, and live PA from Princeton, NJ, now living in Boston. His music is sometimes chilled out, sometimes heavy, but always glitchy, electronic, and above all, funky. His live shows incorporate on-the-fly mashups and remixes of his own original tunes, which range from glitch-hop to electrofunk to drum & bass. You can catch him rocking shows around Boston and on Lost in Bass on Glitch.FM every Monday night. Ali has a free EP and single out at http://aliberger.bandcamp.com/ and tracks forthcoming on several small but notable labels in the summer of 2011.

Professorpious has been hooked on electronic music since the late nineties where he was drawn to the frenetic sounds of DnB as a young man. He bought some turntables found a warehouse and threw his first parties in late 2000. A brief trip to London in 2001 and a visit to Fabric nightclub provided the catalyst to switch styles from DnB to Breaks. Then in 2005 Pious attended Burning Man and heard Dubstep and Glitch Hop for the first time and instantly knew this was the sound of the future. Today you can hear anyone or all of these styles in a Pious set.
Currently Pious holds down residency at Lost In Bass every Monday on glitch.fm as well as at the Tuesday weekly Music Ecology.