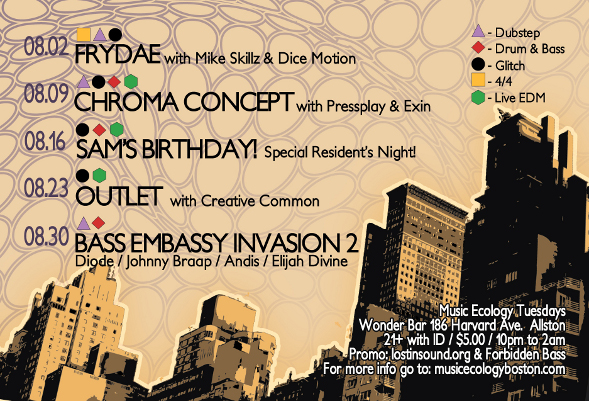 Jonathan Belfontaine, otherwise known as Outlet, was destined to make music from the very beginning. At a young age, Jon was given a guitar. Soon afterward, he stumbled upon a broken amp, took it apart and put it back together into working condition. Having an incredible ear for music, he was able to pick out notes, and play along with any song. Over the years, he's played in different rock bands,... but his musical interest never stopped at just the guitar, always picking up a bass or a set of drumsticks. While being influenced in different genres of rock, he also became deeply integrated into the electronic scene. Soon he had a keyboard and was experimenting with making music all his own, with psychedelic melodies and hypnotic tones, empowered with heavy instrumentals. After a brief hiatus, his burning passion was reignited when he and his soul mate Elisabeth Marcoux went to Rothbury's music festival in Michigan. Hearing the mind blowing artists perform with such love and high energy, and being immersed in the unified and uplifted crowd, sparked Jon's need to make music again. They immediately went out and bought him a Juno G. The new keyboard, paired with his discovery of Ableton Live, allowed him to explode into creativity again, this time integrating the sounds of hip hop, soul, funk and trance. He has now been producing a dance oriented, groove inspired, glitchy style of music that is energetic, passionate and fun. Of course, infusing his positive vibrations and inspiring light, baked into every morsel of each tantalizing song. The concoction of organic sounds whipped and blended with original bass lines and drum patterns, along with his ability to manipulate the texture and flavor of each synthesized note will leave the listener delighted in savoring every delicious layer baked into every song!