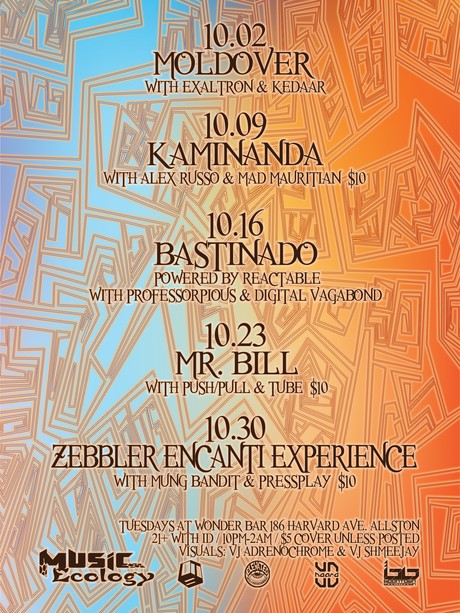 Music Ecology is excited to bring you the Boston debut of Mr. Bill, all the way from Australia!
Known for his solo work, Abelton Live tutorials as well as the project Electrocado, this is what Mr. Bill has to say about himself.
________________________________________________________________
This project is based around evocation, I like to write music that excites the ear and the brain. This requires me to explore all sorts of strange production methods and musical theories to keep exciting my senses.
I started writing music in 1996. From 1996 to 2004 I explored all sorts of contemporary music, in 2004 I began using Garageband and exploring electronic music. In 2006 I was introduced to Ableton Live by a friend and since then I have spent most of my time learning more about it and refining my craft to the point it is at now.
People have described the art associated with this project as a distinct brand of 8bit glitchy funk as well as an audiological reflection of our world growing ever more mechanistic which seemingly takes sounds and influences from every aspect of life and a representation of the inner workings of the quantum realm when harvested through concentration and intent.

Push/Pull
Push/Pull was born in late 2011 and has since begun emitting full-spectrum blasts of audio that will both caress your speaker cones and massage your ears. With focus on large-scale movement and a fine attention to detail, Liam's music is equally suited to a careful listening environment or a large dance floor. This new solo project sees Liam moving in a slightly different direction than his previous partnership with Sheridan Willard as Perileyes.
The two did recently collaborate on a remix of Opiuo's "Robo Booty" that was released exclusively on addictech and charted for about a month.
In the past few years Liam has had the privilege to play sets at Sonic Bloom, The Big Up, The Magnetic Gathering, Equinox, and more, as well as share the stage with acts such as Ott, Kilowatts, Bird of Prey, Excision, Lotus, Benga, Nasty Nasty, Ana Sia, Break Science and more.


Heissmusik's TUBE (Liquid Sky)
tube was the first moniker of prolific producer/composer Frank Heiss aka fr4nkster. Back in the early 1990's, Inspired by T-Power's remix of DJ Soul Slinger's Abducted, fr4nkster dove headfirst into the Jungle, armed with... an MPC-3000 and an all hardware live PA set up, breaking some serious ground in the US drum-n-bass world at the time. His debut on Liquid Sky Music's Home Entertainment imprint, ALIVE, was immediately compared to likes of Aphex Twin, Squarepusher and Animals on Wheels by CMJ and reviewed in magazines like URB, Mixmag and XLR8R. Nearly 2 decades later, fr4nkster has kept the Mental Step sound of tube "Still Alive." More than 20 years after the birth of Liquid Sky's NYC crew, this special performance will contain a smorgasbord of tube music. There will also be a premier of Heissmusik's The Hick Step Massive remix for Gangstagrass and brand new tracks by Heissmusik from the forthcoming album "Awaken" - including the live debut of "Drop The Fuss." For more information see below:

Music Ecology is a Boston based event production collective formed in the summer of 2009. Our weekly Tuesday night residency at Wonder Bar a well as numerous events throughout the city have exposed Boston audiences to numerous local, national and international talent. Our upcoming shows include: