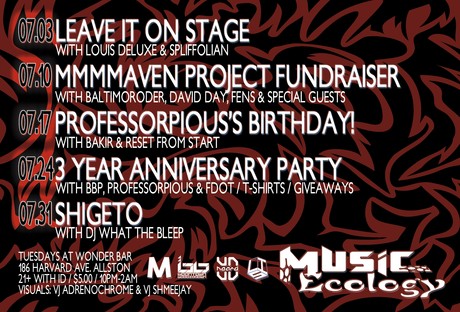 Our friends at Mmmmaven are opening up an EDM production academy right in Central Square. For some reason, DJing equipment is pretty expensive these days. Music Ecology is hosting a fundraiser to help collect a few bucks for this project. This is a great way for everyone to contribute to a great cause! The cover for the night will be our usual $5 but if anyone is feeling generous and wants to donate more, please do so. Your hard-earned dollars will be turned over to Mmmmaven at the end of the night. Read more about the Mmmmaven Project right here.
http://www.indiegogo.com/mmmmaven

Your musical senses will be entertained by

The turning point came after a cross-country trek to Boston and a low-key house party. He took the decks, mixing tracks he had never heard into a swell that kick-started a dance floor. From that night on, the floor never stopped growing. DJing to dance fiends night after night is his passion-whether thugged-out Baltimore music or the retro-sexual glam of Giorgio Moroder. Behold Baltimoroder. New residencies started popping up in all different styles, all the way from Balearic dinner music to Dancehall/Hip-Hop to Techno and Electro. Baltimoroder mixes aggressively and flawlessly in any genre put in his path. It was a chance meeting with David Day; a local promoter and European techno aficionado that took him from the bedrooms to the clubs. Their natural talents were a perfect match; Erik the technical party-rocker and Dave the consummate promoter. In search of greater platform for artists and musicians, they opened the art/event space sQuareOne in the Boston Fort Point district showcasing everything from 2d painting, photography, and film/video to music production, live performance, and some amazing dance parties.

But it was the Hearthrob parties that set a new standard. A partnership between Red Fox, Morgan Louis & Greg Fourner (CEO), Hearthrob combines a strong visual aesthetic and peerless experience rounded out with guests such as Johnny Love, Jokers of the Scene, Muscles, Krames, D.I.M, Lifelike, Alan Braxe, Sinden, The Teenagers and many more.

Fens (Mmmmaven/Banana Peel Records/Together Boston)
Fens (M. Rohr) is the co-founder of Banana Peel Records. He produces electronic music and DJ's, and generally enjoys a good low end frequency. He has also been fortunate to have played at Boston venues such as Middlesex Lounge, House of Blues, Goodlife, Enormous Room, Middle East Downstairs, Fenway Park, RISE, among others, as well as having shared the booth with DJs like DJ Assault, Tevo Howard, SBTRKT, Incyde, Tittsworth, Battles, Ghostland Observatory and many more. He also plays bass in the local indie band Leisure when not behind the turntables.