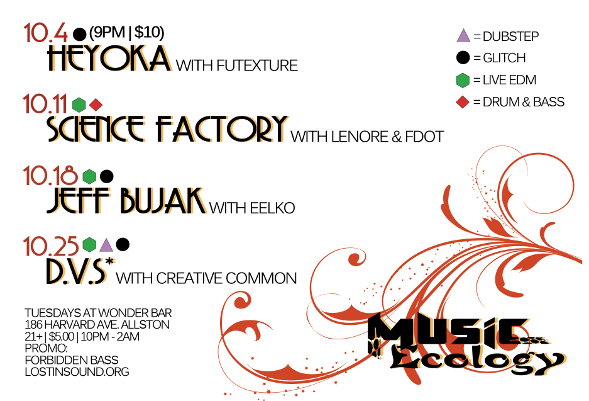 Jeff Bujak
Jeff Bujak is a Northampton, MA based keyboardist/producer/composer who has designed a new style of intelligent dance music (IDM) that dives deep into the waters of complex electronica and he’s carving a fresh path in the live-music scene one performance at a time. Though, if you ask a Jeff Bujak fan to describe his music, a blank face followed by a smile would prove to be a common trial answer, then usually words like ‘dirty’ and ‘epic’ start pouring out. His music falls into a large pool of electronica dance genres, lands on one and leaps to the next while he wails away on his keyboards to create something truly moving, smart and original.

Bujak began his history with the piano at age 7. He started studying music theory a couple years later and began understanding the math of music. Since then, he has written over 300-solo compositions ranging from standard classical styles to extravagant heavy metal fury. He looks for what’s been done before and finds a way to recreate the theory with dance music in a way that hasn’t been heard, yet strangely familiar at the same time. He handcrafts his own hard-driving beats and loops, then samples and performs his half improv/ half composed pieces live to create an experience clearly pushed into it’s own category.

Jeff Bujak tours live full-time with 4-studio albums, over 120-multitrack live-albums under his belt and enough keyboard/ gadget wizardry and sequencing know-how to hold the energy in a raging audience for over 4-hours straight. Whether it’s the two 4 ½ hour non-stop sets on Jam Cruise earlier this year or the countless set-break sets from last year for The New Deal, Lotus and Eoto, Bujak is perfoming memorable sets and quickly becoming one of the most talked about solo acts on the road.
http://www.jeffbujak.com/

Eelko, born Christopher Carchedi, is a live performing artist hailing from Boston, who, with his music, blurs the lines between hip hop, funk, trance, dubstep, and a plethora of many other influences. Drawing inspiration from a love of avante garde jazz and free form ‘jam’ music, Eelko’s live performances are always kept fresh and interesting.
http://soundcloud.com/eelko
http://eelkomusic.com/