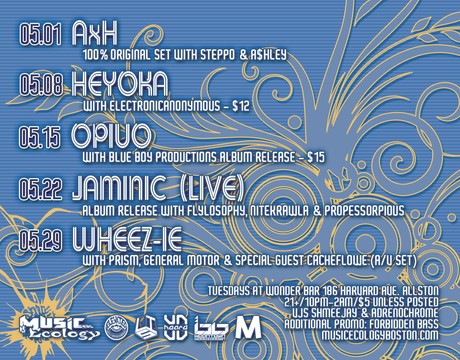 Jaminic
Over the past few years, Boston based DJ/Producer Jaminic has been playing under his main project N.E. Tempo. For this young producer, music is a lifestyle, and he is an inspiration to other young artists who have seen him take a dream and run with it. His interest in playing music started in his early teens when, inspired by the radio, he wanted to learn to mix tracks himself. He started his music career spinning records and soon became immersed in more technology like CDJs and midi controllers. Influenced by artists such as Orchard Lounge, Dirty Bird Records, James Zabiela, and Modeselektor, Jaminic's deep bass and melodic house beats create a feel-good Tropical atmosphere, where everyone wants to be. Currently a student, he has taken classes at the New England Institute of Art for Audio Production, such as Audio Technology--where he studied waveforms and frequencies, and Audio Recording, in which he recorded and edited a band in the studio. He is also largely self-taught though countless hours in the studio working on original production.
Jaminic started playing at local parties and clubs in Massachusetts including Goodlife, Middlesex, Phoenix Landing, Rise, and Umbria. He soon went on to play to bigger crowds at venues like Santos Party House in New York City, Lupo's and Therapy in Road Island, Curve Ultra Lounge in Maine, and Castaway's in New York State. Jaminic has played with some of the hottest artists including Nasty Nasty, Big Gigantic, Benga, Steve Porter, Zeds Dead, Orchard Lounge, Clockwork, Nightriders, Alex B, Two Fresh, Beats Antique BioDiesel, EOTO, Nit Grit, Sub Swara, Walter Jones and last but certainly not least Chas Bronz. He has affiliations with groups such as The Brain Trust, Mass EDMC, True Crew, and CreateSpace Collab (CSC). Ranging threw all genres of electronica Jaminic's main style of sound is tropical bass, as it has many natural elements of global island vocals and crunchy bass lines. Presently, he has a monthly residency at An Tains in Boston called Bass Oasis, which features many local up-and-coming and headlining artists. He is also involved in the production of a music festival located in central Massachusetts called Camp Coldbrook, held in late June, which features live bands, DJs, a silent disco, and performance groups.

FlyLosophy
Flylosophy is the moniker of Producer/DJ Robert DelPrete. Robert started out playing at house parties, private parties and for pretty girls in his bedroom before rising up the ranks of the Boston EDM scene. Robert has played premiere clubs in the Greater Boston Area including The Estate, District and Rise, as well as Wonderbar, The Magic Room, The Wonderland Ballroom, All Asia, Industry (Providence), AfterHours, Camp Coldbrook Music and Arts Festival and An'Tains. Robert has also played popular Boston parties such as Throwed, Bass Oasis, Wobble Wednesdays, Bass Drop and The Monday Mix. In 2011 Robert won Northeastern University's DJ battle which afforded him the opportunity to play at their yearly Zombie Ball Event. Robert closed out 2011 by making an appearance on the decks at NYC's famed Santos Party House. In 2012 Robert was selected by international dubstep producer Rusko to open for him and at the House of Blues in Boston, MA.


Nitekrawla
My life is driven to 126 beats per minute. House music is a a way of life.
Born at the end of the disco era in the late 70's NiteKrawla a.k.a. Anthony E was brought up during the birth of house music in the 80's; however, he would not be introduced to this new style of music until his teen years in the early to mid 90's. Once introduced, he realized this new and fresh style of music would put a grip on him that would develop into a passio. Frustrated by the lack of originality in the mainstream and influenced by this new style of music he began djing as an outlet for self expression in his teen years long before ever being able to step foot in a nightclub. He experienced the scene first hand by the end of his teen years and into his 20's and he found himself throwing "mainstream" music and its remixes out the window and playing underground grooves exclusively. Now into his early 30's and djing for more than half of his life he still continues to play hard edgy underground grooves that control dance floors.


Professorpious
Professorpious has been hooked on electronic music since the late nineties where he was drawn to the frenetic sounds of DnB as a young man. He bought some turntables found a warehouse and threw his first parties in late 2000. A brief trip to London in 2001 and a visit to Fabric nightclub provided the catalyst to switch styles from DnB to Breaks. Then in 2006 Pious attended Burning Man and heard Dubstep and Glitch Hop for the first time and instantly knew this was the sound of the future. Today you can hear anyone or all of these styles in a Pious set.
Currently Pious holds down residency at Lost In Bass every Monday on glitch.fm as well as at the Tuesday weekly Music Ecology.

Music Ecology is a Boston based event production collective formed in the summer of 2009. Our weekly Tuesday night residency at Wonder Bar, a monthly residency at Machine as well as numerous events throughout the city have exposed Boston audiences to numerous local, national and international talent. Our upcoming shows include

For this and future events please visit http://www.musicecologyboston.com/
or find us on Facebook at http://www.facebook.com/MusicEcology
or follow us on twitter at https://twitter.com/music_ecology
check out some live recordings from our Tuesday nights at http://www.soundcloud.com/music-ecology