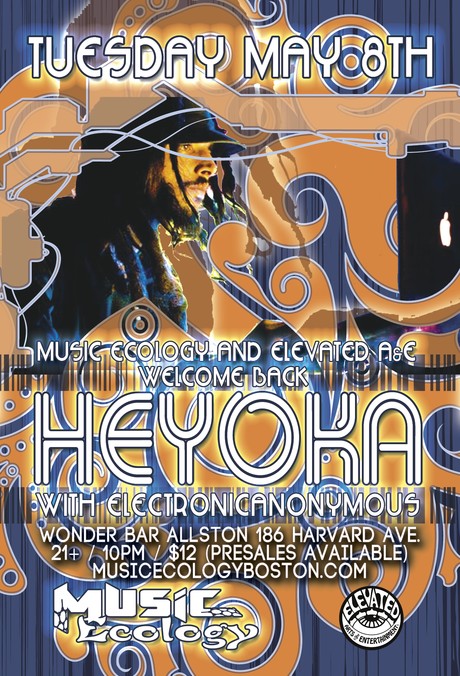 Special Announcement:
Presale tickets for this show have sold out!!! We recommend getting to Wonder Bar before 11 PM since we have only a limited number of tickets available at the door.

Heyoka (Muti Music)
Over the last five years, Andrei Olenev AKA Heyoka, has been bringing a unique twist on glitch hop and psychedelic bass music, emerging as a staple producer and performer throughout the west coast electronic music scene and burning man community, as well as branching into the international glitch hop and bass music movements. Heyoka has brought his signature sound to festivals such as: Symbiosis, Sonic Bloom, Raindance, Lightning in a bottle, Big Bounce, Alchemeyez, and large sound camps of Burning Man such as Nexus, El circo, Temple of Boom, Entheon Village, Roots Society and Fractal Nation. He has also brought his music to several International Festivals such as Shambhala (Canada), Boom (Portugal), Erthfreq and Winter solstice (Australia), and Luminate (New Zealand). Heyoka has a hectic touring schedule throughout North America, regularly visiting clubs, warehouses and festivals of various underground music scenes.
Heyoka's sound blends elements of many musical styles into something that is mind bending and indefinable. While listening to his music, you are taken on a journey through fractal soundscapes and alien dimensions, while riding a wave of fat glitch beats and sub bass. In his live sets, Heyoka chops up and remixes his own original music, always keeping it fresh and hot on the dancefloor. Heyoka's sound evolves album to album, frequently being reinvented while maintaining a unique flavor that is unmistakably "Heyoka". He releases his music mainly on San Francisco's Muti Music, a leader in the glitch hop and bass music scene.
The response to his emergence so far has been overwhelming as Heyoka manages to stand out amongst bass music producers with an almost cult like following due to his unique take on all things 'Glitch' and 'Bass' centric.
http://www.heyokamusic.com/

ELECTRONICAnonymous is the EDM brain-child of Jules Jenssen. 1/3 of underground dance-fusion power trio HiGHER ORGANiX, Jules has been playing music since he was 6 years old, first dabbling in piano, then embracing the drums as his musical voice. Heavily rooted in traditional band style rock/ funk music, (Floyd, Hendrix, Zeppelin, Phish, all his father's bands, etc..) Jules found electronic music as a pre-teen and immediately was drawn to carefully sculpted, evolving beats, throbbing bass, and euphoric synthetic sound design. Although he didn't start making electronic music for years, he continued to integrate the theory into his drumming and live band. In the summer of 2008, Jules dove head first into the world of EDM production and nocturnal sleep cycles, making everything from electro-house, to dubstep, to krunk - -& styles yet-unnamed. Having already headlined shows including Music Ecology @ Wonderbar Boston, played festivals such as Camp Bisco, Desiderata, and the Big Up, shared the stage with OTT, Lotus, Conspirator, MiMOSA, Michal Menert, Sub Swara, Bluetech, King Britt, Dub War NYC and Psylab, to name a few, AND placed in the International top 8 of the Untz.com's producer competition- the anonymous might not be unknown for long...

SPECIAL THANKS TO GigaFunk Live, LLC for providing us with bass music appropriate sound!
http://www.campcoldbrook.com/gigafunklive/

Music Ecology is a Boston based event production collective formed in the summer of 2009. Our weekly Tuesday night residency at Wonder Bar, a monthly residency at Machine as well as numerous events throughout the city have exposed Boston audiences to numerous local, national and international talent.