Filastine with General Motor and FDOT 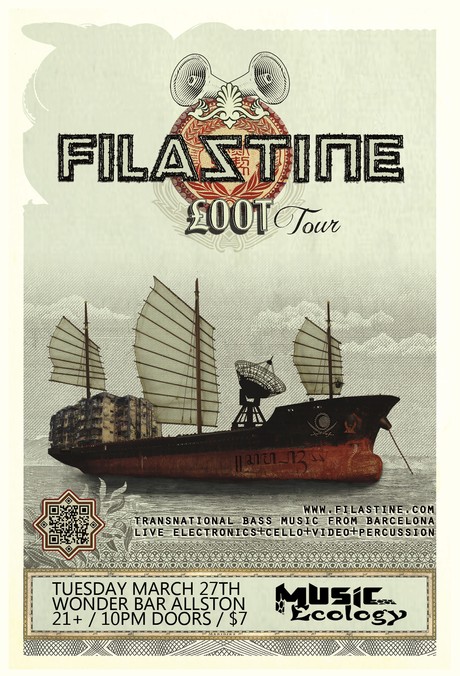 Filastine
"Grey Filastine is a producer/musician based in Barcelona, but more often found traveling with his nomadic studio: studying trance rhythms in Morocco, recording rappers in Indonesia, and gathering street noise from everywhere to compose a dense transnational bass music. It's a sound that collides the deepest frequencies of dubstep with syncopated beat science, acoustic instruments and voices of many tongues.
Best known for his hectic live performances, Filastine triggers riddims and synchronized video from a heap of electronics and an amplified shopping cart, expertly fusing digital elements with live percussion. From a hip-hop concert in Borneo to a soccer stadium in Casablanca, from a car-mounted guerrilla soundsystem to a junk raft floating down the Mississippi, he has played in every type of venue imaginable, with prominent billing at festivals such as Sonar (ES), Transmediale (DE), Shambhala (CA) and Sydney Fest (AU). Performances often feature guest cellist Amélie Bouard or vocalist Nova Ruth Setyaningtyas.
Filastine recently dropped his second album Dirty Bomb (2009), a gritty soundclash recorded in 16 cities with 15 collaborators. "Awesome and delicate... hybrids so fluent they defy classification" -Pitchfork, "the prototype of globalized urban sound... It will devastate your subwoofer" -Prefix Mag. Like the music itself, its distribution is rhizomic and decentralized; the album was released simultaneously on four regional indie labels: Jarring Effects (France/EU), Romz (Japan), Soot (Americas/UK), Uber Lingua (Oceania). Dirty Bomb hit with a hundred-date tour, three music videos, and heavy radio play- charting at #4 on the French Feraliste, #7 on CMJ's RPM in North America.
Filastine first went public in 2006 with the album Burn It on DJ Rupture's boutique imprint Soot Records. "Filled with both jagged edges and moments of sad sweetness... Burn It is sure to win fans across multiple scenes" -XLR8R. Next came a pair of dj mixes, The Mud, Blood, & the Beer: a Fistfight with the Near East (CD,Tigerbeat6), and the heavily downloaded free mix La Pistola Mas Rapida (Blentwell.com podcast #7 & CD).
Before going digital Filastine founded the Infernal Noise Brigade, a 20-piece marching band formed for the "battle of Seattle" that went on to become the soundtrack for a decade of globalization protests. The Infernal Noise Brigade was purpose-built to bring music to political movements in the street. Filastine now does the reverse, pumping the immediacy of the street through sound systems.
2010 began with a sonic intervention at the Copenhagen Climate Summit, a 12" of remixes Extra Dirty Bomb, and the new dj mix We Are Experiencing Turbulence. Expect to find him anywhere, shredding the instruction manual of music, crashing borders, and transforming friction into beauty."http://www.filastine.com
https://www.facebook.com/pages/Filastine/168810016505071

General Motor
"""General Motor is a beat fanatic. While he is firmly rooted in 4x4 beats...GM's sets seamlessly move from techno to house, wobbly basslines and vicious blends of cut time magic. His musical styling showcases his upbringing amongst some of the best in Berlin while cutting his teeth on this side of the pond.""

Since moving to Boston in the early 2000's, GM has embraced the local electronic dance music scene as his home and continues to contribute by throwing parties and events with DJ crews around town. He co-founded the Berlin/Boston based Electronic Music Blog ""DRINKMUSIK"" and recently worked as the Internet Marketing Coordinator for the second annual Together: New England Electronic Music Festival. After forming SUBduction Productions with 7 other Boston-based DJs, The General has had the pleasure of working with some of Boston's most successful crews including BASSIC, UnHeardUV, Banana Peel Records, CreateSpace Collab, DUBWISE and several others. Through the events he has organized, GM has been fortunate to play at some of Boston's favorite venues: Enormous Room, Middlesex Lounge, Good Life, Milky Way, Phoenix Landing, WonderBar, An Tain, Savant Project, Redline, Privus, Middle East...the list goes on. Additionally he has performed with some of his favorite artists from around the globe including Pangaea, DJ Funk, Egyptrixx, B.Rich, Steve Porter, Bakir (of Spit Bros.), Kastle, Appleblim, Incyde and many of Boston's local DJs to boot."http://mmmmaven.com/

FDOT
Part of Boston-based DnB group The Statesmen as well as one of the masterminds behind Music Ecology, FDOT is known to explode the dancefloor with his beats that'll make adults and children lose control.
10 PM, $7, 21+

Music Ecology is a Boston based event production collective formed in the summer of 2009. Our weekly Tuesday night residency at Wonder Bar a well as numerous events throughout the city have exposed Boston audiences to numerous local, national and international talent. Our upcoming events include

For this and future events please visit http://www.musicecologyboston.com/
or find us on Facebook at http://www.facebook.com/MusicEcology
or follow us on twitter at https://twitter.com/music_ecology
check out live recordings from our Tuesday nights at http://soundcloud.com/music-ecology