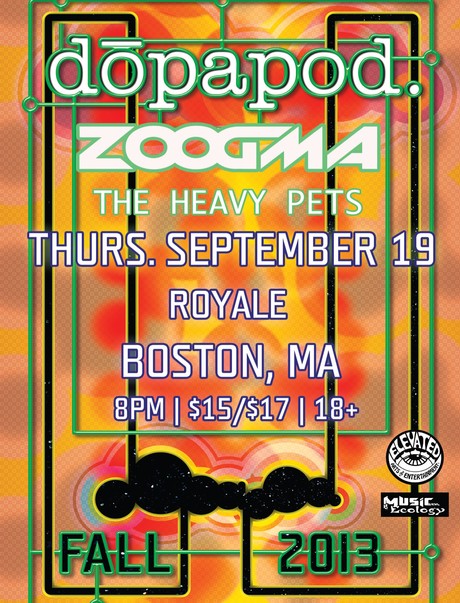 Bowery Boston in association with

Dopapod with special guests Zoogma and The Heavy Pets

Music Ecology has some FREE tickets to give away for this show. Stay up-to-date by visiting our page on facebook.

"Dopapod isn't so much a jam band as they are a band that improvises. They are an electronic band without computers. They are a metal band with groove and soul. They are a jazz group with less wine and more acid. They are what would happen if Zappa, Yes, Deadmau5, and The Meters all sat down for a cup of coffee."

With no regard towards towards stylistic boundaries, the sound that emerges from Dopapod both live and in the studio is as varied and diverse as the many influences that they adapt from. Their approach and commitment to complementing a distinct genre bending sound to top-notch musicianship has set them apart from many of their contemporaries and keeps music lovers eagerly returning to shows.

Dopapod has been touring nationally playing 150+ shows a year for the last three years. Their rigorous tour schedule has seen the young, yet seasoned group make appearances at numerous festivals including Rootwire, Gathering of the Vibes, Bonnaroo, Mountain Jam, Burning Man, Bear Creek, The Big Up, Camp Bisco, and more. Their electric live showcase has been cultivating a fast growing and loyal fan base.

Their third studio effort 'Redivider' was release on December 21st 2012. Having been recorded and released less than a year after the band's last record Drawn Onward came out, recording was done at Tyrone Farm, a scenic and completely solar powered farm in the small town of Pomfret, CT. Opting to take a different route than recording in a studio, the band brought their own to the barn of the farm and produced it by themselves. Redivider displays a drastic evolution in the band's songwriting skills as well as marking the first time ever that the band has added vocals into songs. The added texture serves as yet another dimension in what allows the band to look in multiple directions at one time while remaining focused on a cohesive blend of sound.