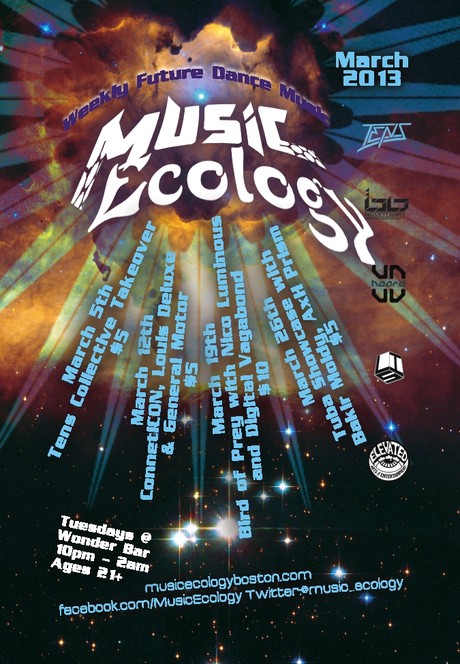 An evening with ConnetICON acts as an intense journey that can be characterized by deep grooves and scintillating bass lines. Each set patiently and flawlessly weaves in and out of melodies, producing an ethereal, euphoric feel, either on the dance floor or in your headphones. Since the onset of his DJing career in late 2010, ConnetICON has quickly established himself, supporting major act's such as Tiger and Woods, Break Science, Cinnamon Chasers, Orchard Lounge, Edit Murphy, Abakus, Goldroom, Emancipator, and Little People.

In the summer of 2012, ConnetICON further established himself as an integral member of the contemporary music scene, with his name featured on bills including, but not limited to, Camp Bisco XI, Gathering of the Vibes, Tipper Sound Experience, and Heads in Harmony II Festival, as well as various venue and club bookings.

A DJ set acting as a canvas, For a CONstructed soundscape.

General Motor is a beat fanatic. While he is firmly rooted in 4x4 beats...GM's sets seamlessly move from techno to house, wobbly basslines and vicious blends of cut time magic. His musical styling showcases his upbringing amongst some of the best in Berlin while cutting his teeth on this side of the pond."

Since moving to Boston in the early 2000's, GM has embraced the local electronic dance music scene as his home and continues to contribute by throwing parties and events with DJ crews around town. He co-founded the Berlin/Boston based Electronic Music Blog "DRINKMUSIK" and recently worked as the Internet Marketing Coordinator for the second annual Together: New England Electronic Music Festival. After forming SUBduction Productions with 7 other Boston-based DJs, The General has had the pleasure of working with some of Boston's most successful crews including BASSIC, UnHeardUV, Banana Peel Records, CreateSpace Collab, DUBWISE and several others. Through the events he has organized, GM has been fortunate to play at some of Boston's favorite venues: Enormous Room, Middlesex Lounge, Good Life, Milky Way, Phoenix Landing, WonderBar, An Tain, Savant Project, Redline, Privus, Middle East...the list goes on. Additionally he has performed with some of his favorite artists from around the globe including Pangaea, DJ Funk, Egyptrixx, B.Rich, Steve Porter, Bakir (of Spit Bros.), Kastle, Appleblim, Incyde and many of Boston's local DJs to boot.


Music Ecology is a Boston based event production collective formed in the summer of 2009. Our weekly Tuesday night residency at Wonder Bar a well as numerous events throughout the city have exposed Boston audiences to numerous local, national and international talent.