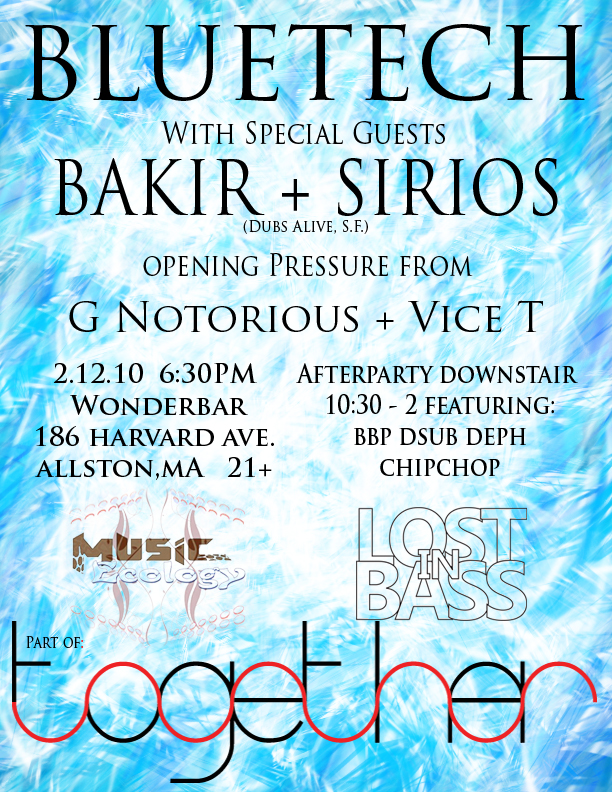 Join Music Ecology, Lost In Bass, and notsmart.net as we present to you Bluetech. A surprise last minute addition as part of the Together New England Electronic Music Festival taking place in Boston Feb. 8th-14th.
http://www.togetherboston.com

Bluetech is Evan Marc Bartholomew. Since the release of his debut, Prima Materia (Waveform Records) in 2003, Evan has carved a soulful sonic path moving between dub, downtempo, ambient, glitch and psychedelic music. While much of his recorded music can be perceived as reflective or meditative, rest assured, Evan also knows how to command a dancefloor, as he proved at his last appearance in Boston back in December. In 2009, Evan released the excellent and more upbeat “The Divine Invasion”, as well as the “Honey in The Heart EP” and “Call Of The Wild EP”, which he has provided as a free release on his website:
http://www.bluetechonline.com
With donation you also receive full quality artwork and lossless FLAC audiofiles.
http://www.myspace.com/iambluetech

Supporting act Bakir and Sirios (Spit Bros., Dubs Alive, SF)
Bakir is a dubstep/sublow producer and performer based in San Francisco since arriving from Boston in 2004. Previously he had been in attendance at Berklee College of Music where he studied jazz composition, film scoring, and trumpet performance. His live show is a mix of djing, dub-fading, and live instrumental perfomance.