10 Easy Ways To Not Be A Bitch

Recently a friend of mine posted an article from Huffington Post by Melanie Curtin titled “10 Easy Ways To Deal With Me When I am Being a Bitch”. It offered tips and suggestion for a potential mate of heterosexual persuasion on how to survive and manage Melanie’s outbursts of non-specified female moodiness and aggression that we commonly refer to as “bitchyness”. Starting with the very title, this article did not sit well with me. Dear Melanie, I realize that this is supposed to be a light-hearted, semi-humorous, insightful look into the female psyche, but c’mon sister, this is not the way. To start with, do you think that maybe, just maybe it’s time to stop perpetuating the stereotypes that women are some sort of irrational creatures devoid of logic and reason who sometimes act in such ways that they need to be “dealt with”? 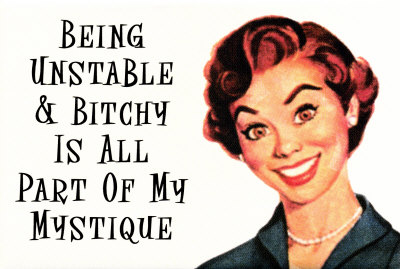 This mentality is not doing anyone any favors. I get where it is coming from, I really do. Women have been told that they are hormonal and crazy and therefore unfit to make any rational decisions for so long that eventually they started to 1) believe it 2) use it get away with shit. Let’s be honest here, one doesn’t need to have a vagina to be a bitch. I’ve met many people with abundant testicles who act like total bitches and the reason they do it is because they allow themselves to. Lashing out, screaming, getting personal and otherwise acting in a way that we call “bitchy” is something that’s very easy to do. Most humans are capable of it; however, a lot of us choose not to do it. We take steps to stop ourselves at the precise moment when “bitchyness” starts to pour out, we take a deep breath and then... we just don’t. As simple as that, we just don’t. The reasoning behind this act is very simple. The only purpose of being a bitch is to make the people around you miserable. That’s it! If you stop making excuses for why you are acting this way and just ask yourself if there is anything at all that your behavior is aimed to accomplish, you will come to the same realization. Acting like a bitch is done to make the people around you miserable. So if you ever find yourself in a room full of neo-nazis, or pedophiles, or animal abusers, please go ahead and bitch away; however, if you are surrounded by family or friends or perhaps a significant other, maybe you should consider actively not being a bitch. Because when someone loves you, it doesn’t mean that it’s their burden to carry your problems. They don’t OWE you anything. They aren’t SUPPOSED to be there for you. They don’t HAVE to do anything for you. They do it because they choose to. Every Single Time! Just remember this fact. Any time someone does something nice for you, they go out of their way to do it. So maybe, just maybe, YOU could go out of YOUR way and figure out how you can not be a bitch to them. Here are some suggestions: